It’s good to see so good reaction to our Software QA Terminology series. In continuation to it, here is one more article in this series about Soak Testing. It is a type of performance testing which verifies a system’s stability and performance characteristics over an extended period of time. Let’s explore it further.

Definition:
As per WikiPedia: Soak testing involves testing a system with a significant load extended over a significant period of time, to discover how the system behaves under sustained use. This can be considered as a type of stress testing. 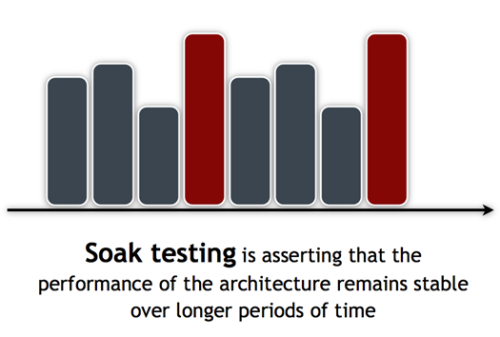 Purpose:
There are many scenarios in which system has to undergo a huge load over a longer duration. One such example is an eCommerce site announcing a hefty discount over their product offerings. They may expect increase in number of visitors for 2-3 days. The purpose of soak testing is to simulate such situations. This helps in verifying if system can withstand excessive load for long duration.

Possible issues:
On performing soak testing, below issues may be noticed in application.

Best practices:
Below are some best practices which should be followed to carry out soak testing efficiently.

As seen from the above article, soak testing provides a measure of systems stability over an extended period of time. A classic example of a system that requires extensive soak testing is an air traffic control system. A soak test for such a system may have a multi-week or even multi-month duration.