JMeter is highly scalable performance testing tool. It can be used to perform distributed tests for large number of users. Since it may not be feasible for many of us to setup required physical infrastructure for distributed testing, we can use cloud services like AWS to perform this task. This post shows how to setup JMeter on AWS to carry out performance testing in cloud environment.

In this tutorial, we will setup JMeter Master-Slave configuration on 3 AWS EC2 instances. As shown in the illustration below, we will have 1 master sending tests to 2 slaves. These slaves in turn will run the tests on application and collect results. After the load test, slaves will send the results to master instance. Master will then combine both the results and generate a report. 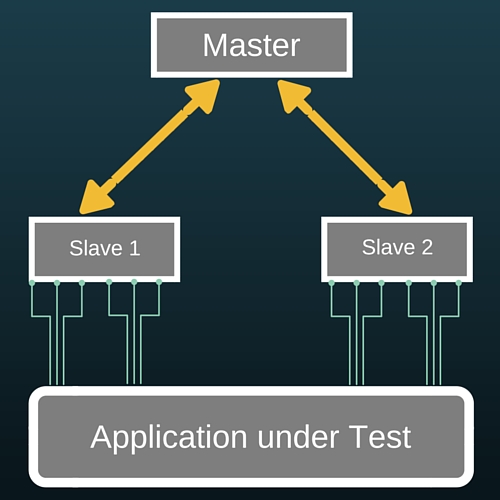 Before starting with setup process however, let’s check out some background information. JMeter uses Java RMI (Remote Method Invocation) to perform distributed testing. RMI requires all systems to be in same subnet for communication. Since the AWS EC2 instances may not be in the same subnet, we’ll need to setup SSH tunneling for them to communicate.

Now that we have all the background details, let’s get into the actual setup process. We have divided the setup procedure in 4 sections as below.

Let’s check them out one by one.

We are done with all the required configurations. Now we can start executing our JMeter tests in non-GUI mode. But first, we need to start JMeter server on slave systems.

We hope the above setup of JMeter on AWS would be useful to you. We would love to hear your feedback via comments.